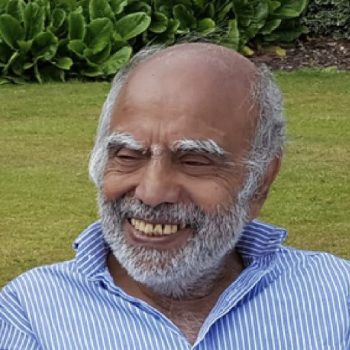 Nand Lal had long wanted to invest in medical and educational access in underserved and underinvested communities. Born near Rawalpindi, in today’s Pakistan, he spent his early childhood on a farm. He was the oldest male child in a family of three brothers who had modest means and little access to formal education. During the Partition, his family migrated to India and settled in old Delhi.

It was there that Nand Lal’s curiosity blossomed. He found refuge in the Qudsia public library, spending several hours there daily and excelling in school. His hard work resulted in him completing his Higher Secondary with flying colors. He topped the All-India college entrance examination and earned a scholarship to pursue Physics Honours in Hansraj College, Delhi University where he received the gold medal in B.Sc. honors. In addition to being dedicated to his studies in his college days, he cared for his fellow students when they were sick. After completing his M.Sc. he chose to enroll himself in Cornell University, an Ivy league college, in the USA and completed his PhD.

Nand Lal was a self-learner and could often be found on his computer mastering several computer languages. For the last 50 years he dedicated himself to working with National Aeronautics and Space Administration (NASA) programs. The Voyager programs were of specific interest to him. Voyager 1 and 2 are a pair of space crafts launched in 1977 to explore the outer planets. Initially launched only to unravel mysteries of Jupiter and Saturn, they went on to investigate Uranus and Neptune. These spacecrafts are still actively sending data to earth even though they have gone beyond our galaxy. Since the inception of the Voyager program until the time of his death, Nand Lal, had been engaged in analyzing data sent by the aircraft to understand the mysteries of the universe.

Nand Lal was compassionate and caring. He knew from his own experience that access to both education and healthcare can change lives. He could never have dreamed how much. It is in his honour that his family is carrying on his legacy by helping to provide greater access to education and healthcare for those who are most needy and impoverished in both rural and urban areas in India.